Chickadees! Zillions of them flit back and forth, snatching seeds and passing each other on their fly past between the feeder and nearby woods. Well, maybe not zillions, but certainly millions. Oh, okay, at least a couple dozen at a time. 😉

It’s hard to catch good shots of chickadees because they don’t sit still for long. This one was taken on a snowy morning at our daughter’s home. I sat at the family room window with camera poised and took several shots, few of which were in focus. Not until I uploaded them to my computer did I discover that (not counting the Common Redpoll’s little butt), I’d caught two different species of them in one shot — the Black-capped (right) and the Mountain (left) Chickadee.

The Black-capped are common where I live on BC’s south coast, as are Chestnut-backed Chickadees that often travel with them, but the Mountain Chickadees are new to me. Maybe I should say I haven’t noticed any on previous visits. A white eyebrow distinguishes them from the other species, but as they dart back and forth, that minor difference isn’t easy to spot.

One thing I find interesting about the birds who visit our feeders is the variety that often arrive together, especially in the winter. Here at home the Chickadees usual travel with Juncoes, and the occasional Varied Thrush or perhaps two or three Steller’s Jays join them. At my daughter’s, the chickadees arrive with Common Redpolls and Pine Grosbeaks. First a bird or two arrives then the rest swoop in for an early morning feed, and leave for destinations unknown until it’s time to return for the next meal. They always make one last visit at dusk, stocking up extra calories for the night.

I don’t know the origin of the “birds of a feather flock together” phrase, but in the avian world it’s certainly true. Doesn’t matter their colour or size, they have feathers in common and many are happy to hang out together to share the benefits, (assuming we’re not talking about predatory kinds such as hawks).

People are a lot like that, too. We like to hang out with those who think like us, or have a love of similar activities. Even writers, who spend much of the time in solitary creating mode, like to interact occasionally with other writers. We know they understand our quirks and won’t question our eccentricities. They’re generous about sharing experiences and helpful information. And best of all, they commiserate without judgement over our query rejections and writing failures.

It should be like that for Christians, too. According to comments and articles I find on Facebook, however, not everyone has a positive experience in church. I read of discrimination, criticism and exclusion, and that boggles my mind! I haven’t observed that in the churches I’ve attended, but obviously it happens.

When it comes to sharing God’s love, we could learn a lesson from the birds! “Evangelism is just one beggar telling another beggar where to find bread.” [D. T. Niles]

Next time I see joyous wee Chickadees flocking to the feeder, I know I’m going to remember this.

As Sandra Heska King’s “Still Saturday” winds down and merges with Lisha Epperson’s “Give Me Grace”, I link up for today’s transitional posts… 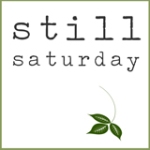 4 thoughts on “Birds of a feather…”