Clouds and sunshine, light and shadows… September’s weather can be an unpredictable mixture. Often the first week of school is summery, making it hard to be closed into a classroom. This year it hasn’t been, at least, not here. There have been clouds and showers every day so far, with occasional sunny breaks. Any clear skies seem to appear only in the evenings. We’re hoping for sunny days towards the end of the month with a family wedding in the offing, but you never know. 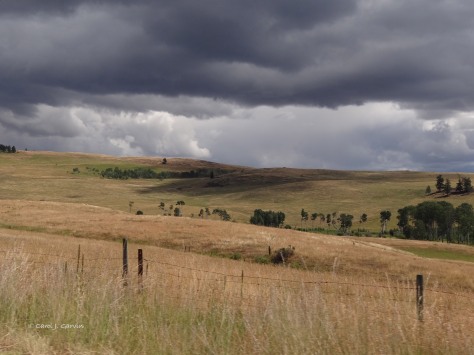 (A click on either photo will enlarge it for a closer look.)

This month of new beginnings has its pros and cons. It elicits enthusiasm, but it can also overwhelm. So much happens, and all at once. Holidays end, school starts up (well, everywhere except in BC’s public schools where the teachers are still on strike!), clubs and meetings resume, and we suddenly come face to face with all the tasks and commitments we put aside at the end of June.

We stumble into September with good intentions, maybe even with fresh goals, but without much forethought as to how they will be accomplished. As the proverbial snowball gets rolling and the calendar squares start filling, the highest priority activities get the attention they demand while the less obvious ones slip quietly into the background. Too often they turn out to be the ones we subconsciously think of as self-indulgent and expendable.

Does writing fall into that category? If we consider it a hobby, then it’s okay to relegate it to leftover fragments of time. However, if we’re aiming for a writing career, be it primary or secondary, it must be treated as a serious commitment and given its due time in our daily schedules.

If we don’t give serious thought to our needs as writers it won’t be hard for life’s storms to build up, envelop us and devastate.  Self-preservation isn’t an indulgence!

When we finally acknowledge that we can’t do it all, and a grey cloud of discouragement begins to hover, what can we eliminate to keep from being overwhelmed?

2 thoughts on “September Clouds and Shadows”