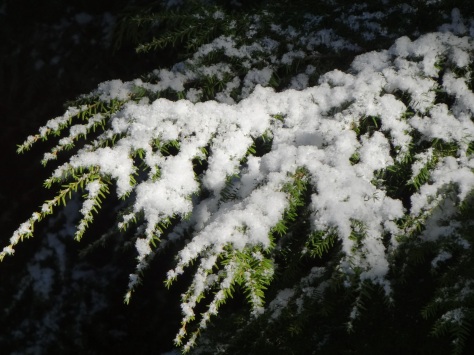 I hate those days when I sit down to write and my brain won’t cooperate. It’s not that Ms. Muse isn’t around, but that the perfect and plentiful thoughts she provides instantly disappear, falling into the shadows of my cerebral cortex before I can secure them on the page.

It’s not dementia or writer’s block, but that infuriating bleakness in my head I call the creative wilderness. It’s a cavernous void lurking somewhere between eureka and gotcha, where amazing ideas slip away into the dark, whirl around in a vortex, and finally re-emerge, frosted with mediocrity. I had a morning like that a few months ago, when a brilliant idea shimmered for an instant, then dropped out of sight. I struggled to grasp the elusive thought but the words I eventually dug up were lackluster. Nevertheless, they provided crude building blocks, so I pinned them onto the page and continued to write.

Then during recent revisions, a glimmer of the original idea flickered into sight. The sun came out; the temperature rose; the chill receded. I wrote furiously and the scene became what I had long ago envisioned. Gotcha! Finally.

There is a moral here… something along the line of persevering even when the Muse shows me a cold shoulder. Not getting bogged down searching for the perfect words when they’ve been temporarily sucked out of reach. Believing that I can always return to make the inadequate better, but if I allow myself to get dragged to a standstill waiting for the desired words to reappear, the rest of the story may never get written.

Are you one who has to make every scene perfect before moving on to the next, or do you ‘write like the wind’, getting the basics in place, knowing that you’ll strengthen the weak spots in later revisions?