I’m delighted to welcome Laura Best to my blog today. Laura has lived in the small community of East Dalhousie, NS her entire life. She was a contributor to Christmas in the Maritimes: A Treasury of Stories and Memories and A Maritime Christmas: New Stories and Memories of the Season, and her fiction has been published in literary magazines across Canada, including The Antigonish Review, Grain, and Room. In 2003, her short story “Alexander the Great” was nominated for the Journey Prize. Released by Nimbus Publishing on October 1, 2009, “Bitter, Sweet” is her first novel.

LB:  The story is about a family who move into a small community in rural Nova Scotia in the 1940’s. They are barely settled in when their father abandons the family. Soon afterward their mother becomes ill and eventually dies. While she is sick, their mother prepares them for her death making them promise that they’ll do everything they can to keep the family from being sent to foster homes. But when the authorities eventually show up the children are forced to do whatever they can to ensure they stay together.

LB: The inspiration for the story came from a newspaper clipping, an incident that I thought would make an interesting scene in a story. When it came time to write, the oldest daughter, Pru, gave me the first line, “After she died, we buried Mama behind the house.” The rest of the story came together quite easily after that.

CG:            You live in Nova Scotia and I understand that’s the locale for the story. How closely did you adhere to real people and places for your characters and setting? Did you ever worry that friends, family or neighbours might feel you were writing about them?

LB: I wanted to make sure that the places, such as the Anglican Church, the Dale Post office (which by the way was a little room in the house I presently live in), Lake Torment, rang true. I knew it would be important for the readers who were familiar with the community. My characters are all imagined and I never once thought anyone would compare them to real people, especially since it was set twenty years before I was born. 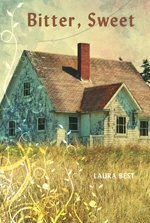 CG:            Was there ever a concern that having a Canadian setting might limit its publication potential, or did you always expect to have it published in Canada?

LB: While I was writing “Bitter, Sweet” I concentrated only on the story that was crying out to be told and not what would happen in terms of publication once it was written. Writing a story is one thing, having it published is a totally different story altogether. I’ve never, in the past, considered publication in any other country other than Canada. I’m not really sure why, I just haven’t.

CG:            Everyone has a story about “how I found my agent/editor/publisher.” Can you share a bit of the journey that led you to Nimbus?

LB: I was published in two Christmas anthologies that Nimbus put out. I also knew they are the largest publisher in Atlantic Canada and prefer to publish stories that are relevant to this area. Since “Bitter, Sweet” is set in Atlantic Canada I thought it was worth trying them.

CG:            How long did it take you to write BITTER, SWEET?  Was the first draft close to the finished product or did it go through multiple revision transformations?

LB: I’d say I worked on “Bitter, Sweet” for about three months. I never sit down and write a first draft. I tend to edit as I go so that when I finally reach the end the story is pretty much where I want it to be. I did make changes later to the first two chapters once I was finished but it wasn’t anything substantial.

CG:            Did you do a lot of research before starting? Are you a writer who plots and outlines first, or do you dive in and figure things out as you go?

LB: While writing “Bitter, Sweet” I needed to do a bit of research on plants since the use of healing plants native to Nova Scotia is present in the book and of course the deadly night shade plant or bittersweet from which the title comes. I knew a bit about the subject myself, since my father was knowledgeable about these things as was common for people from that generation who live in our area. I often remember him digging out gold thread from the ground to steep into tea.

As far as plotting goes I tend to dive in and figure things out as I go, although I can see how working with an outline might be beneficial and could be something I might use in the future.

LB: I have an office where I do a lot of my corresponding but I find I use that area less and less for writing fiction. I also have a laptop and often write in an armchair in my living room.

LB: I think most writers have doubts from time to time especially when the rejection slips keep coming in. It is difficult to have faith in your ability as a writer during those times. I’d sometimes wonder why I was putting myself through this torture but those times were short-lived. I never allowed myself to become discouraged for anymore than a day or so and sometimes only a few hours. Being a self-taught writer I knew I had/have so much to learn. I try to look at writing as a learning process. It helped that family and friends were so supportive.

CG:            Do you have any advice for writers who are a step behind you in their pursuit of publication? Anything that you wish you’d known before you waded in yourself?

LB: The only bit of advice I have to offer anyone seeking publication is to write and rewrite. It’s not enough to write the story. You have to try and make it as good as you possibly can. Be true to who you are. Write what’s important to you, not what you think is trendy. Last of all, don’t give up. Stay determined. Many talented people drop out before seeing their work published because they can’t stand rejection.

CG:             What are your plans for promotion and marketing or does your publisher look after these? Where can people buy copies of BITTER, SWEET?

LB: Nimbus has set up signings for me with Chapters and Coles store in the area for the month of November in six different locations. Articles have already appeared in two of our local papers to promote the book. “Bitter, Sweet” can be ordered directly through Nimbus publishing or from Amazon.ca, Chapters.ca and, of course, bookstores.

LB: There is always another story in the wings, Carol. I presently have one under consideration but I have several others in various stages of completion.

LB: I’d say you’ve pretty much covered everything although I would like to say thank you for setting up this interview! It’s been fun!

Thanks, Laura. It’s been a treat to learn more about you and your novel. I’m so glad you agreed to this. I wish you much success with BITTER, SWEET!