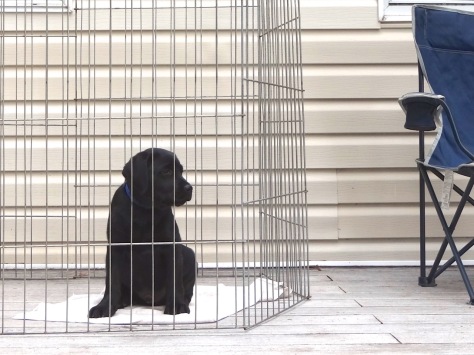 When used correctly, crates and exercise pens are very handy tools for dog training. Like a child’s playpen, they can be overused, or used for the wrong reasons, but they are invaluable when it comes to having a safe place to contain a puppy and avoid the havoc he could wreak when left untended.

Yes, he’d rather be outside romping with the children, tromping unfettered through the gardens, or chasing birds through the meadow and scampering down the driveway to the road, but for his safety and my sanity he can’t be allowed that kind of freedom.

As wistful as he may look in these photos, he doesn’t spend all of his confinement grumbling about it.

He snoozes, plays, and observes what’s going on — and dances with anticipation when one of us approaches with his leash. That means there’s a training time coming, complete with praise and snacks, and followed by a walk with opportunities for lots of exploration. It’s all part of the discipline associated with a puppy’s education (and in the early stages, of housebreaking).

I was writing a short story the afternoon I stopped to take these inside photos of our new puppy. When I later reviewed one of the shots, his expression seemed like one of reprimand. “How come you won’t take me outside if you’re not really working?”

Why was I so easily distracted? Was it lack of discipline or something else? I have to admit it was more a matter of discouragement. I have three pieces to write this summer, each with a deadline. The one with the closest deadline is for a contest I enter every year, and it’s giving me the most trouble.

I’ve had a breakthrough, though. I recalled the definition of insanity attributed to Albert Einstein — that it’s doing the same thing over and over again, and expecting different results. While my early entries in this particular contest were shortlisted a few times, they never won, and more recently they haven’t caught anyone’s attention. The same two people have been judging the fiction category every year for more than a decade, and I’ve realized that if they haven’t rewarded my writing before, it’s probably ‘insane’ to think they ever will. The contest is sponsored by a very reputable group and there’s great prize money, but no feedback is provided, no critique. You either win, or you don’t. I don’t, and I’ve finally concluded I’m wasting my time, energy and entry fees!

The revelation is freeing. I finished a different article and submitted it today, well ahead of when I’d planned. The remaining one is drafted and I have a month to work on its edits. I have time to go romp with the dog! Woo hoo! So much for my self-discipline. 🙂

How do you view writing contests? Do you enter many? Have you ever won?