Every so often my posts on writing stretch into the realm of song writing. You’ve heard me brag a bit (here and here) about Ra McGuire and his iconic rock band, Trooper. Ra’s son, Connor McGuire, is the next generation of our McGuire family musicians, singing, writing and performing his own music. His EP Different After Dawn was released in 2007 and with his current band, The Lives of Others, he’s working on another to be released soon.

But out of my church family there’s another band emerging that deserves recognition. Ibhendi is a group of four talented teenagers who are singing, songwriting and performing out of Maple Ridge, BC and have just released their first EP, Humble Beginnings. I finally got my hands on a copy today, and I’m impressed!

All four boys –Johnathan Booy, Jonah Larmor, Regard Booy and Riley O’Connor – come from different musical backgrounds and, in their own words, “Nothing can come closer to a full description of Ibhendi’s origin than those two words, [i.e., the album title, Humble Beginnings]. Regard Booy only started playing bass because the band lacked a bass player. Riley O’Connor’s guitar had a broken head that was super glued to hold the tuning knobs. A small 10watt amp was the only amplifier in the group, and the drum kit was completed by borrowing bits and pieces from a church’s kit…. No one had any idea of where to begin looking for performance opportunities. But with perseverance, determination, and a dream, the four fought on, and slowly but surely, nothing became something.”

Now, doesn’t their journey remind you of ours as aspiring novelists… dreaming, determined, persevering and fighting to make something out of nothing? (You knew I’d find a way to apply this to our writing, didn’t you?)

Does your writing involve any poetry or songwriting (or both)?

Anyone who knows me well, knows that I’m a huge Trooper fan. I’m very proud of my cuz, Ra McGuire, Tooper’s lead singer. He’s been singing in a band since he was twelve… I don’t think he’d want you to count how many years that’s been, but he’s still singing, still touring, still making albums, and the band has become a Canadian rock legend.

You haven’t celebrated Canada Day properly unless you’ve ordered your copy of their newest album, Hits From 10 Albums: Digitally Remastered 35th Anniversary Special Edition*, released on July 1st, thirty-five years to the day since the release of their debut album, Trooper. This album is “a retrospective” that spans Trooper’s entire 35-year recording career. It also includes a ten-page booklet of notes written by Ra, and photos of the band. 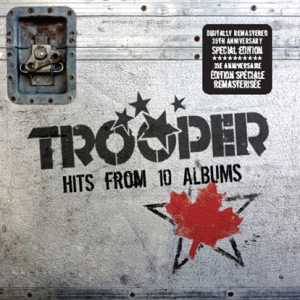 Their bio says, “Millions of records, a couple dozen hits, sold-out coliseums across Canada, a Juno Award (Canada’s Grammy) for Band of the Year. The Vancouver Sun called them “Canadian rock heroes of the first order … the best performing band in Canada.” … “Trooper’s ten studio albums have earned multiple gold and platinum awards and their 6X Platinum greatest hits album, Hot Shots, remains one of Universal Music Canada’s best selling catalog CDs and one of the country’s most enduring party soundtracks.”

All bias aside, if you need toe-tapping inspiration as you write, or just a solid background of great music from an iconic band, I highly recommend this new album! You can order it online here.

And in case you’re wondering how I’m going to tie this into writing, Ra isn’t only a singer, he’s a writer, too. His book, Here For a Good Time, was published by Insomniac Press in 2006. I recommend it, too.

I’ve been galavanting for the past few weeks, enjoying visits with family and friends in BC’s Kootenays and Okanagan. Precious times and lots of good memories, but it’s good to be home again.

Ten days ago there were grey skies and lots of clouds, but a blogging award from Joylene Butler definitely brought sunshine to my day.  We often speak of writing as being a very solitary pursuit. Blogging provides opportunities for feedback but even then we never really know how much (or how little) impact our words actually have. When someone surprises us with an award for being inspiring that in itself is inspiring, so thank you, Joylene, for sending the Sunshine Award my way. I’m smiling! 🙂

Tonight the star-studded Vancouver and Whistler Olympic Victory Ceremonies Concert will feature Trooper and Loverboy. I’ve heard some of it will be shown on CTV but it will also be broadcast live on MuchMusic from 8:00-9:00 p.m. PST. You can bet I’ll be watching! I may be family but I’m also a dedicated fan. Yay, Trooper!!! Timeless rock ‘n’ roll, for sure!

And now I’m off to watch the Olympic Canada-U.S.A. hockey game. It may be just a preliminary game, but I’m boldly waving my red and white.

Here in Canada this is Thanksgiving Day and tomorrow is Election Day. At first glance that seems like an unfortunate combination. While the global financial world has been drowning, Canada’s stock market flounders in sympathetic dives and bellyflops, scaring home owners, investors and pensioners alike with its thrashing. Our present political situation doesn’t appear to be in a state for which thankfulness is a rational response.

But the very fact that we have the right and freedom to vote for the party that we believe can best address the situation is something for which we should be supremely thankful.

On her blog yesterday, Shari Green (DD 🙂 ) urged everyone to vote. She posted the Rick Mercer parody of Trooper’s hit song “Raise a Little Hell”.

“If you don’t like what you’ve got, why don’t you change it?”

“If your world is all screwed up, rearrange it!”

“If you don’t like what you see, why don’t you fight it?”

“If you know there’s something wrong, why don’t you right it?”

I think Trooper is onto something!

I’m going to wear my Trooper T-shirt to the polls tomorrow and vote! Am I thankful that I can? You bet!