This morning I was made aware of how much my attitude limits my achievements. A television interview with athlete and paralympian Rick Hansen left me in awe of the example he sets, not just for the physically handicapped but for everyone. He has already accomplished more in his life than many able-bodied ever will.

While discussing his Man in Motion world tour — when he wheeled himself around the world, 40,000 kilometers through thirty-four countries on four continents — Rick was asked what was the greatest hurdle he encountered. He said it was overcoming inertia and the fear of making a start.

Now, if that doesn’t speak to us at every stage in our writing endeavours, nothing will. Think about

What’s your biggest writing hurdle right now? What can (and will) you do to try and overcome it?

What are you going to do while you’re here, with your every breath? — Rick Hansen 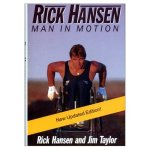