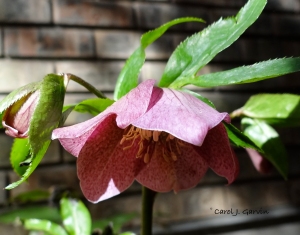 The Royal Horticultural Society says, “Hellebores … are perennial garden plants with elegant flowers, perfect for brightening up shady areas during late winter and early spring. Some species are grown for their striking evergreen architectural foliage.”

When purchased sixteen years ago, these two plants were simply labelled “Helleborus Orientalis (Lenten Rose)” and I intended and expected they would be identical. Not so. One is a dark pink with red spots, and looks like it might be ‘Rosina Cross’, but the other is a lighter pink, almost white, with dark pink spots, much like a ‘Cherry Davis’. Since neither was named, however, I’m not sure what they are, except that they both have down-facing blossoms.

Some nurseries insist there is no such thing as an up-facing Hellebore but others advertise them, suggesting the blooms face outward, rather than down. All I know is that mine are regularly battered and spattered by mud whenever it rains hard, as it did last week.

I wonder if I should be taking a lesson from them — something about keeping my head up through any storm if I want to come through the downpour unscathed.

It sounds reasonable until I think about facing the wind with head down, chin tucked into my scarf, the only way to stay warm as I walk.

Maybe there isn’t a lesson at all. Maybe it is enough to remember that these beauties have survived here sixteen years; they’re sturdy and persistent, returning to try again every winter, always bringing me a smile when I discover them unfurling despite rain, mud and snow.

Then again, maybe there’s a lesson in that!

Warmer pre-Spring days urge new growth in the gardens. It’s such a delight to see signs of the coming season everywhere. Buds are bursting on our lilac bushes and in the woods around our home, while the Lenten rose blossoms and leaves of emerging daylilies dip and sway in the still chill breezes.

Not all is idyllic, however. Elsewhere on our property the deer have made salad of the lily spears, munching them off with scissor-like precision. Drat those deer! The lilies will eventually bloom – they manage to do so every year – but it will be later than everywhere else, and the clumps will look tattered. I should relocate them to a less visible location but I tend to ignore the damage and hope that the availability of this convenient meal will distract the deer from other tasty tidbits elsewhere in the garden. 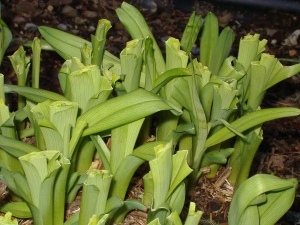 In your writing, when new ideas begin to emerge, do they always reach maturity? What can mar your earliest efforts? Do you always abandon them or is it possible to find something worthwhile to salvage?