This past weekend we went in search of the migrating Bald Eagles who have begun arriving in the Fraser Valley from Alaska and northern BC. It was something we did two years ago (and I wrote about it then, too), but it’s not something to be done only once in a lifetime.

While they may not be the largest birds in the world (the Wandering Albatross and the Ostrich hold that record), the eagles who arrive here are the largest of their species, at anywhere from 28 to 40 inches in body length. They may weigh up to 17 pounds and have a wing span of eight feet. That’s pretty impressive, and I never tire of being impressed! 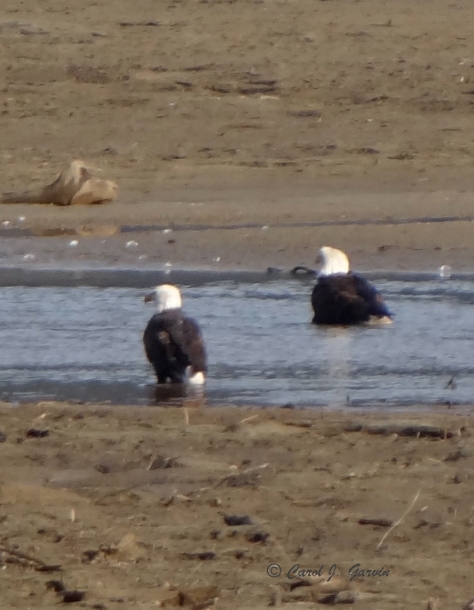 Gorging on spawning salmon in the Chehalis River flats 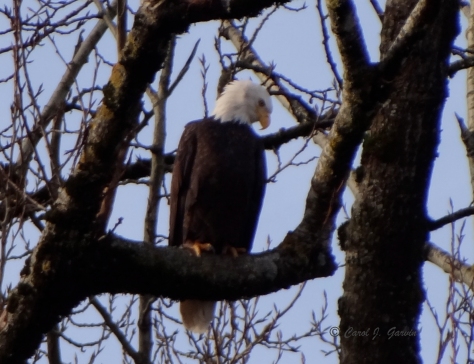 This was the second of four consecutive weekends of the Fraser Valley Bald Eagle Festival. The main festival weekend is always the third weekend in November, but I’m happy to avoid the crowds. Besides, the largest number of eagles are usually evident later in the season, in mid-December, which is when we visited last time.

Our son and his wife and daughter accompanied us for the first time, but there weren’t as many eagles as I’d hoped to be able to show them. David Hancock’s blog reported “the Saturday at dawn count revealed 2,380 eagles on the Chehalis Flats and Harrison Bay — about twice the number over last year.” So they’re out there, just not always visible from the more convenient viewing locales. There were a few eagles in nearby trees, however, and we were able to bring back some nice photos.

If there’s a writing lesson to be learned here, perhaps it’s that timing is important. At the recent conference I attended, I had requests for both a partial and a full manuscript. I’ve procrastinated as I work through yet another revision, even though I’m aware that December is the least desirable month for agency submissions. In fact, some agencies are closed to submissions in December.

If we want our manuscripts to be well received, we need to have done our research… to know not only where but also when to send them.

Yes, I hear what I’m telling myself!