The ‘back road’ we travel for the twenty minute trip to and from our son’s home takes us along a winding rural route through forest lands, past two lakes and over an hydroelectric dam. We’ve watched with mild interest as BC Hydro has logged and created a right-of-way that cuts across the landscape for a new 500 kilovolt transmission line being built over mountains and through the wilderness between Merritt and a substation in Coquitlam, BC.

Late last week we drove over the dam while keeping an eye on one of the helicopters that is helping in the stringing of the transmission wires along the new towers. It was an impressive sight with one helicopter hovering so low above us, and linesmen working so high! (That’s one person on a platform by the top wires. They don’t always stay on those platforms. At times we’ve seen people scrambling around on the metal braces of the towers.) 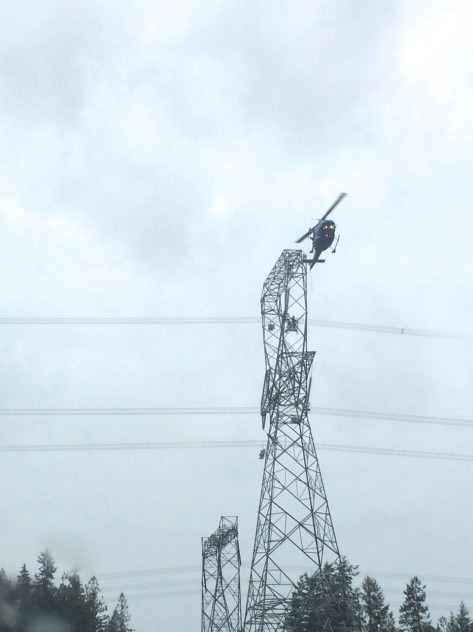 Global TV News did a brief update on the project recently, and it includes a video showing one of the other helicopters that we’ve seen, that one a massive construction helicopter maneuvering the top section of a tower into place. All four of its corners had to meet with something like one-half inch precision! It’s mind boggling.

I wonder if, in the initial stages, designers and construction crews are ever overwhelmed by the impossible magnitude of such a project. Or do you think they have a mental overview of the entire thing, and an understanding of how to break the undertaking into manageable pieces?

Do you think maybe that’s the approach authors are meant to take when beginning a new novel? I don’t know if it would work for me. I like a seat-of-the-pants method but that’s only because I know I can do extensive revisions later. There’s no doing over of 100 metre high transmission towers and a 500 kilovolt power line. I’m afraid, if I had to get it right the first time, I’d never make it through to the end of the first draft. How about you?