Ghost-like memories of piano playing — years of scales, discords and sweet harmony from ivory keys — are hidden somewhere in the history of this old Chickering Victorian Square Grand Piano. No longer are visitors encouraged to play a tune on it. With its wires strung horizontally from left to right, rather than from front to back, its soft, subdued tones (listen) would be unlike what is produced by today’s pianos. But this one sits unused, silently overseeing the comings and goings of patrons in the lobby of a unique log building in BC’s south Cariboo.

Jonas Chickering was the first piano builder in the United States, established in 1823. The Chickering brothers were known for building some of the finest pianos in history. This piano bears the Chickering name in gold lettering, but not in a style of text born by any other Chickering antique pianos that my research has unearthed, so I can’t vouch for its authenticity.

At one time a faded sign on it proclaimed, “circa 1883”, (or maybe it was 1853) but the sign has been gone for a while. Square grands existed from 1823 until the end of the 1880s. They began to lose favour when uprights became more popular, and were pretty well obsolete by 1900.

This particular piano sits against a wall, surrounded and topped by an accumulation of other collectibles from assorted eras. I wish I could rescue it! I’m not a great pianist or even a collector of antiques, but I want to clear everything off it, gently dust the keys and lower its lid against further insult.

I want to hear my daughters play it, or perhaps our church pianist — someone who understands all the emotion a piano can express and would appreciate its uniqueness and its place in musical history.

But I left it untouched… left with only photographs, and a longing to know its story.

Do you own a piano or another musical instrument? If it could talk, what story would it tell of its time in your household?

According to Wikipedia, an antique is something “collected or desirable because of its age, beauty, rarity, condition, utility, personal emotional connection, and/or other unique features. It is an object that represents a previous era or time period in human society.”

Nobody could ever call me a collector of antiques. I’ve never been one to frequent second hand stores or antique galleries. I’m not big on old furniture, although I do have a few pieces, precious only because they’re connected to a bit of our family history. 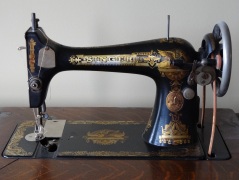 My grandmother’s ninety-five year old Singer sewing machine went from her home to my parents’, then was transferred to their northern residence where lack of electricity meant its treadle mechanism was useful. It hasn’t been used in years, but now belongs to one of my daughters, the only real seamstress in our family, who appreciates its historic value.

I don’t do a lot of sewing, but I have a small sewing machine that serves my mending needs and helps me make the occasional set of curtains.

There are lots of added sophistications on newer machines, but in nearly one hundred years, the basic principle of a needle and a series of loop stitches being used to close a seam hasn’t changed much.

Some things never change. Storytelling has been going on since the beginning of mankind. I did a search on the oldest known novel and found several claims. One suggested THE EPIC OF GILGAMESH as the oldest written story, dating to somewhere between 2750 and 2500 BC. Another said the oldest English novel is PIERS PLOWMAN written in the early 1300s AD.

One thing is clear; people have been captivated by stories of mystery and intrigue, mythology, the supernatural, and family sagas for centuries. Those of us with a yearning to record or invent stories of our own are simply carrying on the tradition.

We may not scratch hieroglyphics into stone, or carefully pen words on papyrus, but we nevertheless place words on some kind of more modern vehicle so they may be conveyed to others. Our efforts link us to history, not in the tools we use but in a creative desire common to generations before us.

I started this by saying I’m not an antique collector, but I must admit to a fascination with old books. I don’t look for first editions or pristine copies, but just like to bring home the occasional “old” volume discovered at a church garage sale. I mentioned some of them in a blog post here. The oldest fiction (actually, I’ve realized it’s more of a memoir) I’ve encountered is an 1834 edition of R. H. Barham’s THE INGOLDSBY LEGENDS.

I also have a relative’s handwritten diary dating back to 1881. It’s not fiction, but when I read of monthly wages of $24, and that a church social raised $14.69 less a dollar for tea and sugar, to help pay for the circuit preacher, it sounds far fetched to my modern ear! I wonder if anything I’ve written will still be around 132 years from now, and what people then will think of my monthly income.

Do you like antique hunting? Not counting the Bible, can you name the oldest book you’ve read?

Typewriters are making a comeback. I know, it sounds ludicrous, but according to an article in the New York Times, it’s true. Among the comments on my last post was one by journalist Caitlin Kelly that took me to her Broadside blog. There she discussed the NYT article and reminisced about her early typewriting experiences. She said, “As someone old enough to have begun her journalism career working on a typewriter, I remember well the joys and frustrations – fingers covered in Wite-out! No delete key! Physical cutting and pasting! – that went along with it.”

Dusty and almost forgotten, abandoned in the darkness of my office closet, a plastic case hides the forerunner to a succession of many Mac computers – an electric Smith Corona SL470. My husband has often suggested it’s taking up unnecessary space and should be scrapped, or at least donated to a church garage sale, but I can’t quite convince myself to part with it.

It’s not antique by any means, and isn’t even my first typewriter. My first was a sleek Olivetti portable, given to me one Christmas by my parents.  My dad asked me to help choose it, ostensibly as a gift for my mom, who typed up his business invoices on an ancient Underwood. What a surprise to discover the Olivetti under the tree Christmas morning with my name attached to it!

Mom, on the other hand, continued to plunk on the Underwood until receiving a hand-me-down Royal years later from my in-laws.  It was a great improvement. The Royal’s keys were wonderfully smooth, and no longer etched circles into my mom’s fingertips.

Generations of writers have recorded their stories using typewriters, and some would say creativity flowed much easier than with today’s computers. The ideas poured out, keeping pace with sixty-words-per-minute keystrokes. I’m not sure sitting at a typewriter, hands poised over the keys while staring at a blank sheet of paper, is really much different than sitting at my computers staring at the blinking cursor on a blank screen.

The memories don’t provoke many creative ideas, but perhaps the convenience of a delete key and a save option compensate for the lack of any tactile inspiration. 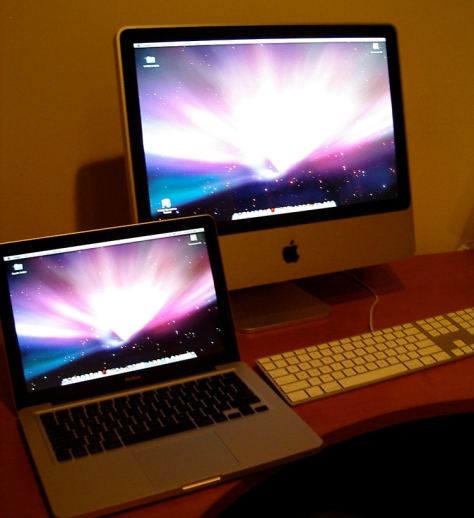 I know I don’t miss the Wite-out, or erasing multiple copies sandwiched between sheets of carbon paper. I don’t miss wasted paper balled up and tossed into a garbage can. Or faint lines of type when I needed to change the ribbon but didn’t have a replacement on hand.

Then again, there really was something unique about the tappity-tap and ding… something satisfying about flinging that carriage back to start a fresh line.

Ah, the nostalgia! I think I’ll go plug in the Smith Corona and give it run, just for old time’s sake. It doesn’t have a carriage per se, but it still makes a good thunk when I hit the return key.

What’s been your best writing tool – pen and paper, typewriter, word processor, computer? Any antiques in your closet?