I’m old enough to recall dancing around a maypole on May Day. Dressed in our best, with an art-class-created crown of flowers and ribbons, my Grade Two classmates and I did our best to skip in and out, around each other, guiding the long streamers from the top of the pole. Rehearsals must have given our teachers grey hair. Time after time we giggled our way through the pattern, only to have at least one of us mis-step and end up with the streamers tangled instead of neatly braided.

There’s a special post-Easter  joie de vie that wends its way into May. The dreary, colourless winter is subtly overtaken by springtime blooms, and I become impatient for my pre-Mother’s Day treat which entails a trip to the local nursery for bedding plants to begin filling deck tubs and hanging baskets. 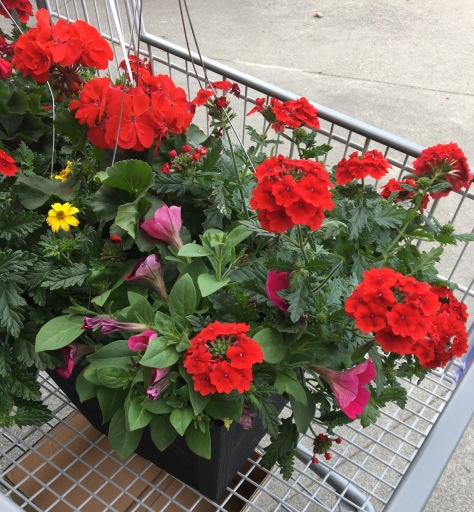 This year the impatience hit me on April 2nd while in Costco. Multiple shoppers passed me with beautiful baskets of bright flowers in their carts. When I discovered their source (and the ridiculously low price) in the garden section, I squelched the little voice that told me it was wa-a-a-y too early in the season, and I picked up two hanging baskets. My usual choice of colours would be pastel, but these screamed with bright red, deep pink and sunny yellow. My inner self apparently craved colour!

Of course, once home, I had to pamper and protect them against the still-frosty nights. They spent three weeks nestled under the eaves, against the patio doors where I could slip out every night and wrap plastic bags around them. But now it’s May. They’ve been hung where I can admire them from our family room windows, which is where I sit when I’m writing.

The trouble is, now that I have something lovely to stare at, I’m doing more staring than writing, and that’s not terribly productive. I sent a manuscript off in early February, then occupied myself developing another work I had in progress. Writing went relatively smoothly through March and part way into April. Then I turned my attention to Easter projects I had committed to doing for my church.

And after Easter? Mmm … my hanging planters are so pretty.

To be honest, I have to admit as I stare at those flowers, the same little voice that cautioned me about buying them has been whispering other discouraging ideas, ideas that make me question if I’m waiting to hear about the submitted manuscript before finishing another novel; and if I am, why.

I will always write, because I love creating stories. But — I resist saying this — I may not always write with the goal of publication. I’ve received considerable encouragement from agents and editors, but without the validation of the next step, the little voice suggests that continuing in the current direction is futile. I want to ignore this unsettling whisper — after all, it was wrong about the flowers — and I’ve never been a quitter.

It’s a time for thinking, for contemplating my options, and, while I’m at it, I can also draw up the list of bedding plants I plan to buy on Mother’s Day weekend.

“There is a time for everything,
and a season for every activity under the heavens”