After several days of suffocating heat, the summer solstice arrived today in delightful moderation — filtered sunshine, a breeze and 21C degrees. It couldn’t be more perfect. 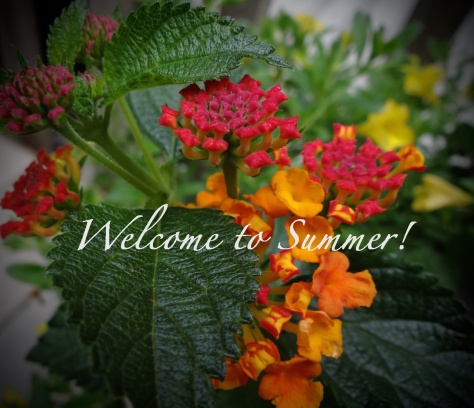 My bare arms were even a bit cool as I sat out on the back deck this morning. (But I did NOT complain!) Now I’m doing a bit of writing and revising, and have suddenly been faced with the realization that in this current manuscript, my characters haven’t complained. Not once. That made me think back to the previous book. Did anyone complain in it? They argued (sometimes a lot), they objected to some happenings and reacted negatively to others, but I can’t recall anyone actually complaining.

I may have to go back and check, because reality says ordinary people always seem to find something to complain about — the weather, a child’s behaviour, the condition of lettuce at the grocery store. Even glass-half-full people don’t live every minute of every day in a Pollyanna glow.

As writers, we have the ability to create make-believe worlds where everything is the way we would like our lives to be. The main characters can always be thoughtful and kind in their interactions with other likeable characters (we’re not thinking of the villains at the moment), but how realistic is that? How credible?

When writing dialogue, it’s important to make our characters speak ‘normally’, which means they won’t always use full sentences, or show a clear step by step progression of thoughts. Colloquialisms and abbreviations will happen. To have them speak formally would make for a stilted conversation. A similar parallel occurs in how they live their lives. There are going to be occasional speeding tickets about which they will grumble. Granted, storytelling should minimize the mundane and stick to the important scenes that move the story along. But a glimpse into the everyday reactions of our characters is necessary to keep it real. It’s okay if they occasionally complain.

In a word or two, how would you describe your main character’s personality? How does that affect how s/he reacts to conflicts encountered in the story?

2 thoughts on “Summertime & Keeping it Real”