June! Another new month well underway. We’re four weeks into our en suite renovation and I’m happily watching the bits and pieces come together. Well, yesterday happily would have been stretching it. Yesterday it was anxiously. 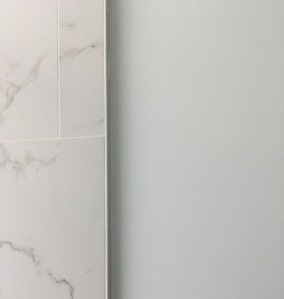 Carrara marble fools us into thinking it is white with grey veining, but when one is trying to match the background ‘white’ with paint for the remaining walls, it’s not white at all. I know that from the renovation of our other bathroom which has the same tiles. Last time, my colour choice wasn’t exactly what I intended, so this time I was determined to find the right shade — a greyish-white with a slightly blueish undertone, the same as the tile. There are thousands of off-whites, but I was pretty sure I had found the right one this time. It wasn’t until the painter had left after finishing the first coat that I looked in and saw…blue walls. Ack!!!

I stewed about it for a bit; actually, for quite a bit. I figured I would once again have to swallow my mistake and live with it — after all, it was a pretty shade of pale icy blue — but I really don’t want blue walls! That’s when having a wonderful contractor paid off. I finally sent a timid text message, — “What can I do if I don’t like the paint colour I chose?” — which initiated a flurry of action and less than twenty-four hours later the painter was back, with buckets of new paint. I apologized since it was my mistake, but was told, “No problem. We want you to be be happy. We want you to love your new bathroom, not just like it.” I tell you, these people* are awesome!

It’s not just tile setters, electricians, plumbers, drywallers and painters that have been working around here. Hummingbirds have also arrived. I’ve blogged frequently in the past about our busy little visitors but they continue to entertain, flitting and fighting as they do.

While there are also Anna’s Hummingbirds along BC’s west coast, only the Rufous ones come to our feeder. They’re the feisty ones. They’re also the ones with the longest migratory flight of any other bird, relative to their body size — 3,900 miles from Alaska to Mexico. They “make a clockwise circuit of western North America each year…up the Pacific Coast in late winter and spring, reaching Washington and British Columbia by May. As early as July they may start south again, traveling down the chain of the Rocky Mountains.”**

The females are mostly green, with rusty shading. The males are bright rusty-orange. Feisty as they are, occasionally they buzz me when I’m out on the deck, but other times they’ll sit beside the feeder and watch us with caution and curiosity, as this one did. I think she knows where her ‘bread and butter’ comes from! 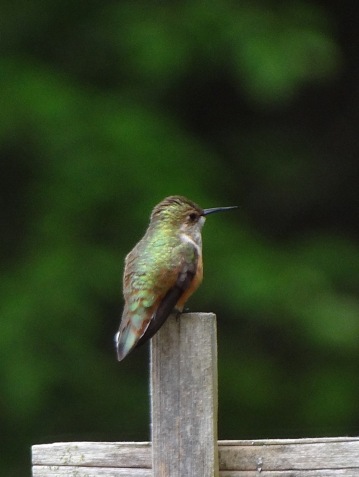 Writing has too often taken a back seat to being a ‘sidewalk superintendent’ and birdwatcher lately, but I am moving slowly ahead with a new story.

Tomorrow is registration day for this fall’s Surrey International Writers’ Conference (yay!!!), which provides  lots of motivation. I’ve managed to get there more often than I ever thought possible and always experience a wonderful weekend of inspiration and professional development shared with my daughter, the award winning writer Shari Green! (How I love being able to say that.)

** All About Birds – Cornell Lab of Ornithology