This morning’s first rays of sunlight found a gorgeous place to touch down. The one and only Vine Maple on our acreage is visible from the kitchen windows and provided a wonderful first ‘welcome to Tuesday’ sight.

I didn’t notice the colour yesterday. Monday was a grey morning, plus I have to admit my eyes weren’t fully open until much later in the day. I was in reluctant withdrawal mode, recovering from three-and-a-half days at the Surrey International Writers’ Conference.

It’s my annual insanity — a long weekend where I push my introverted and sometimes claustrophobic self aside and venture into a crowd of more than seven hundred writing delegates, presenters, trade show vendors, conference staff and volunteers. Yes, seven hundred! This year’s attendees came from eight Canadian provinces and territories, twenty American states, and from as far away as Switzerland, Australia, Luxembourg and Dubai. There were fifty-eight best-selling authors and industry professionals who offered more than eighty workshops, keynote speeches and special events. Whew!!!

Yes, it can be overwhelming, but I’ve been attending since 2004 and I know what to expect. I don’t find it intimidating anymore. I end up physically exhausted, but I’m always mentally exhilarated. Professional development is the goal; rejuvenation is a byproduct. All that valuable information topped off by mingling with others who know what it’s like to spend a ridiculous amount of time struggling to maneuver the right word from tip of tongue onto page — it’s a heady feeling!

It’s impossible to convey every fabulous detail and benefit of this unparalleled conference. After 2015’s I didn’t try, but instead did a round-up of my comments from previous years, complete with links back to each of them. I can’t say anything that will reverberate any better than what I’ve said in the past, so I think I’ll simply refer you back to that conglomerate post which you’ll find HERE. 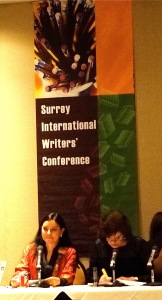 And suddenly I realized they have a personal message for me! The pencils, pen, and typewriter, the hands on a keyboard, and jumble of alphabet letters…they’re all tools on which I must focus in my journey to create stories if I hope to share them one day with readers. Anything else is superfluous…a distraction from the goal.

All weekend I was surrounded by the subliminal message that the goal of the weekend — the hours learning in workshops, listening to keynote speakers, conversing with other writers, agents, and editors, and sharing ideas — is writing. If I don’t return home and delve into my words with renewed inspiration and the desire to produce better stories, the weekend doesn’t serve its ultimate purpose and I’ll have let down all those whose efforts went into hosting it to help me become a better writer.

It’s a great kick in the pants for me. I write most days, but I haven’t been proactive when it comes to finishing revisions and pursuing publication. I’ve been dawdling on the path. Things are about to change around here!

How about you? Do you have achievable goals? Are you working your way towards them? How important are they to you?

I’ve always found that anything worth achieving will always have obstacles in the way and you’ve got to have that drive and determination to overcome those obstacles on route to whatever it is that you want to accomplish. [Chuck Norris]