My St. Patrick’s Day post shared bits of my family background, including photos of my two sets of grandparents. They were a big part of my life all the way through childhood. Once I was married, however, life took my hubby and me away to live in assorted provinces throughout Canada — places where the rest of my family didn’t live — but fortunately I had great memories of many gatherings and experiences that involved all my grandparents.

My hubby, on the other hand, was four years old when he remembers seeing his Grandma Ella Garvin for the last time. She was the only one of his four grandparents who was still alive when he was born.

There are many reasons why his parents had him and his brother later in their marriage. Before his father, Edison, finished high school, World War I took him to France for three and a half years of military service. Following his discharge he worked for a year before embarking on a series of Bible College courses in preparation for ministry. After supplying pastoral care as a student in Stratton, ON, he went to a small, rural congregation in Ridgedale, SK while continuing his studies extramurally. He married Mary Elizabeth (Beth) Haines in 1924. 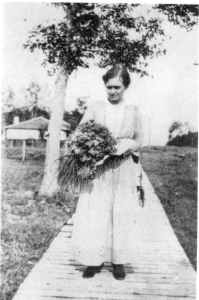 The manse in Ridgedale was little more than a drafty shack — I’m told they could lay in bed and line the stars up through a crack in the roof. Edison’s ministry there was abruptly ended by two years spent battling tuberculosis in a sanitarium in Saskatoon, followed by a long recuperation period. During his recovery, he undertook some part-time ministry and continued more extramural studies, this time from Knox College, before finally being accepted for ordination.

It wasn’t until he was called to full-time ministry in a church in Selkirk, MB that their children were finally born. Edison and Beth were both 42 years old when my hubby arrived. We’ve often quipped about my husband’s parents being old enough to be the parents of my parents who were 20 and 21 when I was born.

When writing our church’s history in 2015 I added this comment:

“Who we are as a church today is
a direct result of the journey of faith
begun by those who travelled before us.”

I believe it’s equally true for a family. Our roots have contributed to the people we are today. We exist because of those who came before us. If there’s truth in the cliche that we can’t know where we’re going until we know where we’ve been, then it’s important to be aware of our ancestors and what led to where we are today.

So I shall muddle on in my genealogy project. I haven’t yet unearthed a photo of the fourth grandfather, William Haines, but am hoping I’ll find it in one of the many boxes still stacked in the corner of my office. Don’t hold your breath! 🙂

6 thoughts on “Another Generation”