A bit of blue sky, a glimpse of sunshine…yesterday was the perfect day to paint or play, depending on your priorities. For my hubby, it was his morning to begin applying the white paint I had taken several weeks to choose. Our kitchen mini-reno is almost complete. With all the construction done, it’s now paint and fabric time.

He was carefully applying Benjamin Moore’s ‘Vanilla Milkshake’ to the breakfast nook wall when he discovered two adult bears on the lawn below the window. Both were black bears, Ursus americanus, although one was decidedly brown. (Black bears come in various shades of black, cinnamon, brown, even white. If you’re curious, there’s lots more info here.)

For these guys, it was time to romp through the garden, tromping on shrubs, overturning that pink pot of sedum, and breaking a branch or two. Then they settled in to graze on grass, just as a different visiting bear had done exactly one year ago to the day. (I shared that morning in photos here.)

We noted the yellow tag in the black bear’s ear, a sign that he had been relocated by conservation officers. It was likely this was the same bear who visited our back deck on a couple of earlier nighttime bird feeder raids. That one wore a yellow ear tag, too.

On closer inspection of my photos, it looked like there were actually two tags, each with different numbers. Not a good sign for this bear, who apparently is establishing his reputation as a troublemaker. 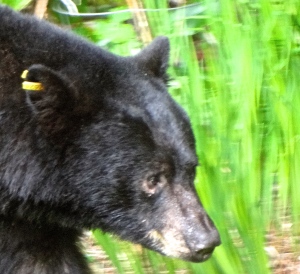 We’ve duly reported the encounter to the conservation office, but living rurally means we expect to see wildlife here occasionally. Last night it was coyotes, a pair behind the house yipping and howling in competition with the chorus of tree frogs.

I’ll take wildlife any day rather than the smog and congestion of city living. Over the four-or-so decades of my hubby’s studies and pastoral service, we’ve lived in both big and small centres — Vancouver (BC), Toronto (ON), Coleville (SK), Creston (BC), Calgary (AB), Port Alberni (BC), Langley (BC), and Maple Ridge (BC) — almost always having our homes on typical residential streets.

In retrospect, we wish we’d discovered country living a lot sooner. It isn’t a lifestyle that suits everyone but the peacefulness and treed setting is a blissful sanctuary for us.

I realize my love of a quiet rural setting has rubbed off on my fictional characters who are all situated somewhere other than in a major city. They all own dogs, too. I guess it’s true that we write a bit of ourselves into our stories, but why not? In our world-building, we’re in control of every aspect of our characters’ lives, so why wouldn’t we let them live or work in places reminiscent of our personal experiences and preference?

Would you label yourself a city-dweller or a country-lover at heart? Where do you situate your characters? (Tell me I’m not the only one who imposes my choices on them! Come to think of it, I’ve even had a character encounter a bear on his property.)

9 thoughts on “Just another spring morning…”