My lack of gardening skills isn’t news to most of you. I regularly mutter about the invasion of weeds and wild things throughout my rural garden. We’re on a well, so after their first year, most plants don’t even get watered unless the weather decides to rain down on them. It’s no wonder things barely survive from year to year!

When we moved here eighteen years ago there was a clematis vine that entwined itself around the stair railings on one side of our deck — a Jackmanii, I think (although I never knew for sure). Every year despite severe neglect it faithfully bloomed, albeit half-heartedly, in late September and early October until 2012. That year it didn’t make an appearance and I assumed it had finally given up and died. So last spring I bought a replacement — this time well labelled as a Jackmanii. I found a better location for it where its head would get sunshine (at least as much as any place on our property sees the sun) and its feet would be in the shade.

It grew. That’s about all I can say for it.  Its tendrils clung to the lower trellis and a nearby rhododendron like an insecure invalid while it made a feeble effort to produce a half dozen blossoms. Something ate holes in its rather small leaves.

This spring as I was pouring my usual dose of liquid fertilizer on the assorted bedding plants in our deck’s tubs and hanging baskets, I leaned over the railing and emptied the last half bucket’s excess onto the still-struggling clematis. After a June trip I came home to see lush vines of healthy green leaves enveloping the trellis. Encouraged, I included it in the next regime of fertilizing and watched buds materialize. I recently returned from a brief holiday and discovered — yes, you guessed it — lots of clematis blossoms! (I realize it may not seem like lots to some of you green thumb gardeners, but it’s a relative thing, and trust me, for me this is LOTS!) 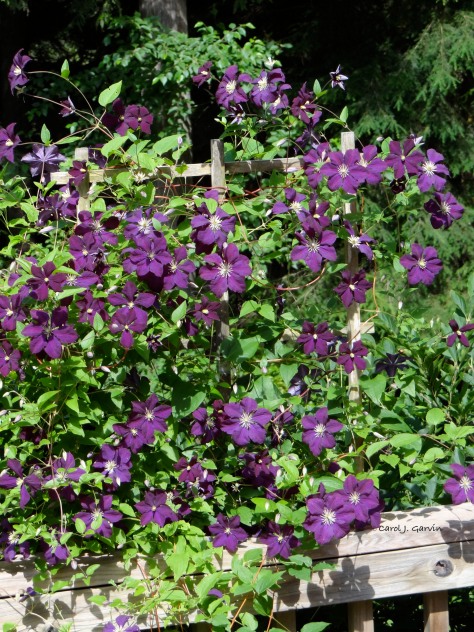 It’s amazing what a little encouragement can do! Add to that, the fact that the forgotten and presumed dead original clematis has now decided to put forth tentative new growth, and it’s all quite miraculous. 🙂

It reminds me of the rejuvenation I feel after I attend writers’ conferences. By sheer osmosis I soak up the camaraderie and enthusiasm along with all the writing information and success stories. I always come home feeling inspired and ready to resume my creative endeavours with renewed energy. I realize it’s not possible for everyone to get to a conference, and I have to forego attending this year myself, but whenever I’m asked for my favourite writing resources, attending a conference (preferably the Surrey International Writers’ Conference) tops the list.

What’s your favourite writing resource for a boost… your go-to for renewing the glow and rediscovering your excitement of writing?

“Without inspiration
the best powers of the mind remain dormant.
There is a fuel in us
which needs to be ignited with sparks.”

6 thoughts on “Confidence-building TLC for Writers”