For all of the almost-seventeen years we’ve lived in this rural neighbourhood, we’ve coexisted with the wildlife. The deer eat some of our garden plants which I replace with ones they don’t like. The coyotes occasionally keep us awake at night, and raccoons play Peeping Tom through the patio doors. A few closer-than-desirable encounters with bears on our deck are memorable, but there’s never been any real problems.

We’ve learned to remove the birdfeeders before bears come out of hibernation in the spring, and to keep the temptation of garbage to a minimum. The acreage isn’t fenced, but we have a fenced dog yard, and in one nook  next to the house garbage cans have been contained in a wooden bin. Only recently did a bear decide to brave the dog scent and scale the fence to investigate the garbage.

Apparently on Friday night he had a midnight craving for our leftovers. I had words with him when he began flinging the cans against the house in an effort to dislodge their secured lids.

The phrase ‘Mexican standoff’ comes to mind. He ignored me, but he didn’t get the lids off, either. However he did manage to pry them up far enough to drag the contents out onto the ground before they snapped closed again. When I rapped on the window above his head and flashed the lights at him, he eventually ambled away… towing a couple of the garbage bags with him as he clambered over the fence, through the back yard and into the bush. Of course the bags snagged on the fence so the resulting mess was greater than if I’d left him to his munching undisturbed.

One day I’ll learn. In the meantime the garbage cans have taken up residence inside the garage where I must edge my way around them en route to the car, because there is absolutely no extra space in our garage. If you could do a better job of organizing our truck, van, Model A, lawn tractor, snow blower, fifth-wheel trailer hitch, freezer, pump organ, work bench and garden tools… well, you’re welcome to try… but that’s why the garbage bins were outside in the first place. I think I’m resigned to just bearing with it until winter freeze-up and hibernation begin again. 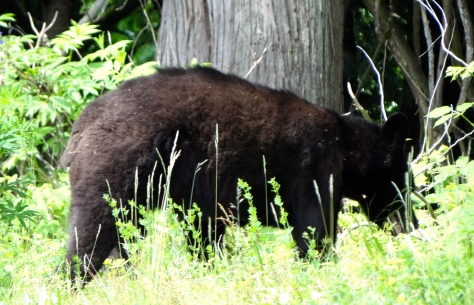 11 thoughts on “Just bearing with it!”