This photo of our 1946 Willys Jeep CJ2A was posted here a couple years ago. We’ve had it since the late-1970s. Before we acquired it from a family friend in BC’s backwoods, it sat unused for years in an old log garage.

For years my husband and another friend tinkered with it. One semester it was driven to school by our son, who worked on it as a project in his Auto Tech class. Another year it was driven to the same school by our eldest daughter who used it in the same Auto Tech class to learn how to fix brakes and do other such jobs. Several of our grandchildren have used it to drive to their graduations, too. The Jeep has become something of a Family Treasure.

But nothing can quite equal the treasure that arrived in our driveway last Sunday evening. A blaring Klaxton horn drew us from the house, and we assumed our son had added the novelty noise-maker to his pickup truck. But no, when we went to investigate, we found it was an original horn attached to an old Ford Model A.

This wasn’t just any old Model A. It was our brother Murray’s, and until a few days before, had been stored in his garage in rural Ontario.

For the past eight years Murray worked nine months of the year teaching at YuShan Theological Seminary in Taiwan, and would come back to Canada each summer to his cottage in Ontario’s Muskokas. During the summer he enjoyed tinkering with the Model A and would occasionally drive it to church. But, as I mentioned in an earlier post, Murray died suddenly last January.

Sometime during this spring, unknown to us, arrangements were made with his family for my hubby to have the car. Last week, while we erroneously assumed our son was away on a business trip, he and our grandson borrowed a trailer and drove a round trip of 8,000 km in less than seven days to pick up the Model A and bring it to BC. 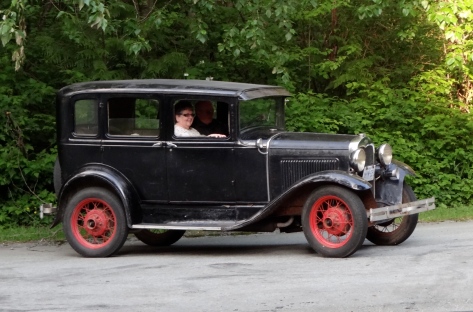 There are no words to express what this has meant to my husband, not just because of what the vehicle is — and as a 1930 Model A it is very special — but because of whose it was, and the love that brought it here. As one of Murray’s daughters said, “I’ve got some pretty amazing cousins.”

No writing analogy today, just a question. Have you ever received a gift that left you truly speechless?

13 thoughts on “The Old and the Older”