One of the flower beds at the front of our house is looking bleak. After fifteen years of neglect, several cypress shrubs were overgrown, and pruning worsened their appearance. Like the heather I muttered about last month, they no longer turned an attractive face to the passing public. (Don’t take me literally. I know they couldn’t be seen from the street, but I need a bit of literary license to bolster my rationale!)

Each summer I planted different annuals around them to pretty up the space. A few weeks ago I decided it was no longer helping. So, last week DH and I made the big decision to dig everything out (including the three offending heathers), and we’re starting from scratch. 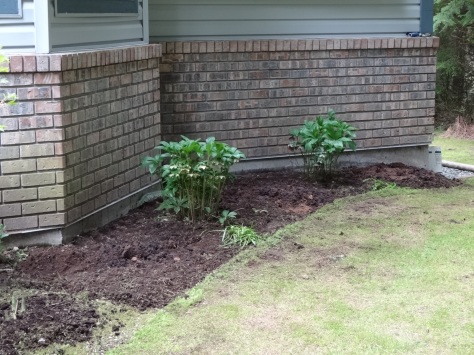 Fifteen years of weeding, watering and pruning. All that work. For nothing. Well, I suppose not entirely for nothing since the bed looked reasonably nice for ten of those years. The problem is, cypress really aren’t the right plants for that location, but I didn’t realize it fifteen years ago. The only plants we’ve left behind are two helleborus orientalis (lenten roses), which have managed to survive surprisingly well despite being hemmed in by the cypress.

I had hopes for a permanently lush, satisfying-to-behold garden bed, but am now resigned to all the work it’s going to take to begin again. More plant research. Money spent at the nursery. Some back-aching soil amending and digging.

Sometimes we have to do the same thing with a novel. We might spend a year (or several) writing it, fiddling with it, editing and revising, but it never quite meets our expectations. There comes a point when we accept it has no future. If we like the premise, the only option may be to toss out all the old words and start from scratch with new ones. Abandoning all the original work is a tough decision, but what’s the alternative?

Pardon me while I go hunt up my pen… er, I mean my shovel.

Have you ever had to abandon your darlings and start over again? Did the new writing take less or more time than the original? Was it easier or harder?

7 thoughts on “Starting again from scratch”