I’m offering an updated November 2008 post today, followed by a few others from the archives during the next two weeks. I’ll be taking a brief blogging hiatus, but will be back with a fresh post on November 13th.

Have you ever lived with a dog? A big one, that thinks he’s a person? We’ve had many dogs through the years, mostly the small-to-middling sized Shelties that I’ve bred, trained and exhibited for over thirty years. But a few years ago we returned to the breed of my childhood, Labrador Retrievers, and I’m beginning to realize our lives will never be the same!

At almost 90 pounds, our current five-year-old male Lab still has a puppy mind in a powerhouse body.  While he’s mentally sweet and gentle, physically he’s sometimes like a wrecking ball in demolition mode.

“Wild dog coming through,” I bellow as he hurdles into the house to greet everyone and slides precariously across the kitchen floor. “Grab your coffee mug (or wine glass, as the case may be),” I yell as his tail swings in a happy arc that clears the coffee table. “Watch out!” I warn as he cavorts through the room flinging his toys in every direction. “Sorry about that. Here’s a towel,” I say when he’s planted an apologetic kiss on hand, cheek, or even mouth (yuck!), and drooled on someone’s clean outfit. He can’t imagine there’s anyone who doesn’t welcome his enthusiastic attention. 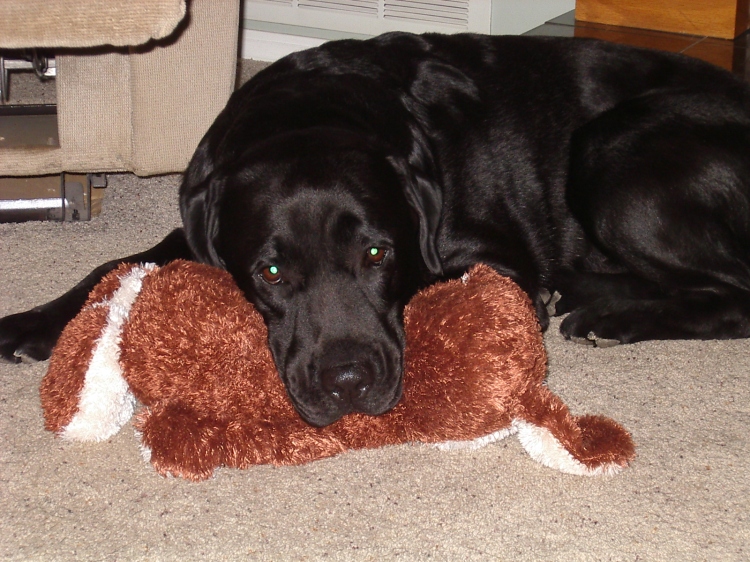 Granted, we only inflict him on those who adore him, and he isn’t always on the move. He loves to crash periodically with his toys, and like most youngsters he’s quite angelic when he’s asleep.

During those moments I’ve been known to say that a second dog might be nice. After all, we haven’t had a singleton dog around the house for years. We lived with as many as five Shelties at one time.

That roar you heard was my husband. “One is definitely enough!”