An overused phrase says it all. Just like a new day, “I’m baaaaack!”

After two different vacation trips to two different lakes, spending time with two different groups of our family, I’m refreshed, rejuvenated and raring to get back into routine. Sort of. I’m not quite ready to rare yet. My brain is still in lake mode, savouring memories.

This past week we trucked into our Cariboo cabin.  To get there we leave the main highway behind, then a secondary paved road, twenty-three kilometers of gravel logging road, several more kilometers of dirt road, before finally reaching the last few kilometers of the somewhat overgrown home stretch, where the guys (my husband, son and a grandson) had to cut out three downed trees with the chainsaw.

For several days we lounged, read, ate lots, spent time in and on the lake, and still had time to build a much-needed storage shed. I also coerced DH to take a drive so I could photograph a favourite haunt… a derelict log building that has stood in the middle of our nowhere since before I began going there as a young child. (I refuse to specify exactly how long ago that was!) 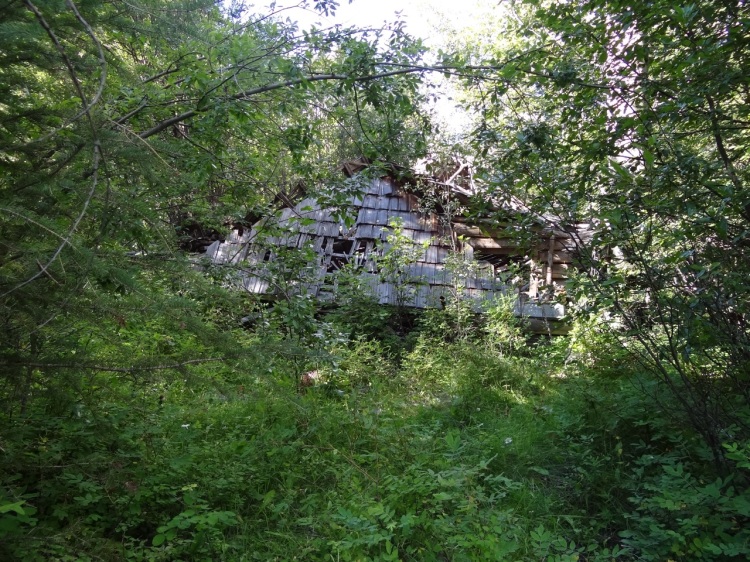 I knew it would happen some day, but it was still a disappointment to discover the roof’s supporting log beam had finally collapsed. 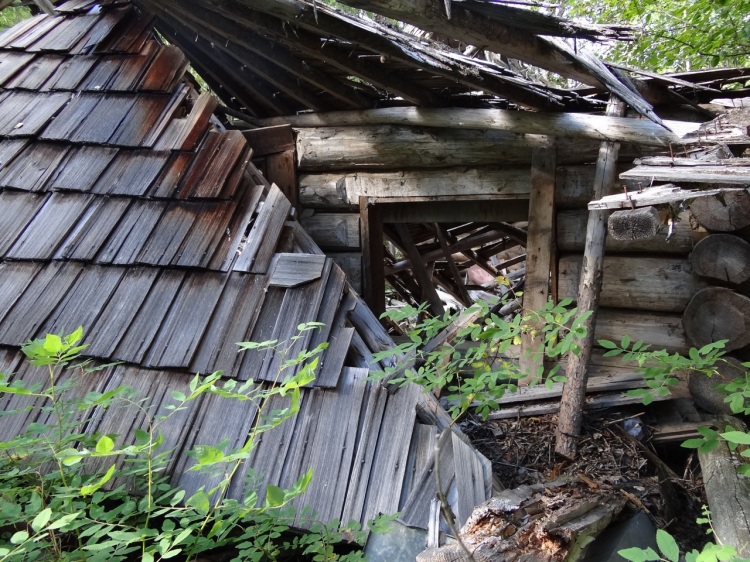 Time brings changes… some good, some not. The inevitable disintegration of this wonderful old building hasn’t changed its beauty, only the way in which it is perceived. It can no longer serve its intended function.

It’s a lot like the effect of time and revision on a novel-in-progress. If you’re a novelist, think about how the perception of a manuscript’s early draft changes after we’ve left it and gone on to write something else. After only a short time, returning to it reveals a few weaknesses. Nothing that tweaking won’t fix, right? We’re convinced it still adequately conveys the shiny idea that originally inspired our creative hearts.

The longer we’re away from it, however, the more problems we notice. Leave it until after we’ve written three or four more novels and reading through it makes us blush. Our hearts begin to skitter in dismay as the amateur writing taunts us with its weaknesses. We cringe to realize others may have seen its meandering plot, common clichés, and one-dimensional characters. Our dreams for it come crashing down.

There’s a reason why established authors, editors and writing instructors suggest a first novel rarely sees publication. Its structure is often too unstable to withstand the major renovation it requires, but it takes time before we can perceive and accept that reality. Sometimes the best thing we can do is let it disappear into the ground, grieve its loss, smile a bit at the pleasure and experience its writing provided, and at the end of the day, move on.

Do you agree with me, or not? What’s your experience? Was your first novel publishable, or, if you’re still writing it, do you believe it will be?

11 thoughts on “Time Changes Everything… in Life and Writing”