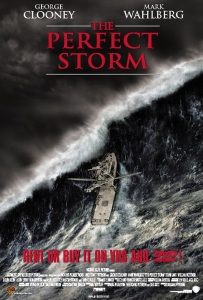 When I watched “The Perfect Storm” I clutched the arm of my chair and frequently held my breath, willing the Andrea Gail to survive the mountainous waves. By the time the huge rogue wave hit I was gasping for air. I knew her survival was unlikely. There was a sense of desperation coupled with despair.

It’s a feeling I’ve experienced before… when life’s pressures become unbearable and I’m sure I’m going under.

Sometimes it can be caused by unrelenting responsibilities, by impossible-to-meet deadlines, or a list of commitments greater than the amount of time it will take to accomplish them. I want everything to go away and leave me in solitude and silence, but that’s an unrealistic desire.

Writers under contract know the feeling. So do parents running a personal chauffeur service to soccer games and piano lessons, orthodontic appointments, sleepovers and birthday parties. Christmas preparations do it for some. There’s all that shopping and cleaning, baking and decorating, school concerts and church pageants, and the realization that the in-laws are arriving in exactly one week.

One summer we took our young children into the mountains of Alberta for an afternoon on the beautiful glacial waters of Lake Minnewanka in Banff National Park. In our small homemade runabout we sailed down the length of the lake unaware of the rising wind behind us until the waves made us realize we needed to turn around and head back to the shore. The turning almost swamped us, and as we motored into the wind, waves repeatedly crashed over the bow and windscreen, soaking us. It was thanks to the kindhearted pilot of a passing larger cruiser that we made it back to land safely. He pulled alongside of us, then slowly moved in front, creating a protected space for us within his wake. 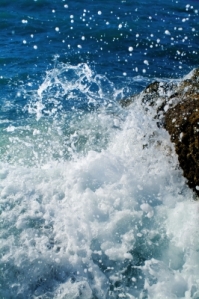 We learned an important lesson that day, one that also applies to other aspects of life. When circumstances threaten to swamp us we need to find a shelter from our storm, before we become a shipwreck statistic.

Do you have a survival plan? How do you deal with sudden onslaughts of overwhelming stress?

Then because so many people were coming and going that they did not even have a chance to eat, he said to them, “Come with me by yourselves to a quiet place and get some rest.” [Mark 6:31]

Then he got into the boat and his disciples followed him.  Suddenly a furious storm came up on the lake, so that the waves swept over the boat. But Jesus was sleeping.  The disciples went and woke him, saying, “Lord, save us! We’re going to drown!”

He replied, “You of little faith, why are you so afraid?” Then he got up and rebuked the winds and the waves, and it was completely calm. [Matthew 8:23-26]